So I've finished my most recent large terrain project, having first had the idea last October (when I stumbled across the key ingredient in a supermarket), I always get there in the end! Saying that, I still have a tub of elves on the painting pile I got in 1993 so I guess my attention span is more of a work in progress.

Without further ado, here is the subject of today's article; a chaos temple long lost to the rampant undergrowth of Ghyran, recently rediscovered and reconsecrated by the pestilent followers of Nurgle. Read on to see how I slapped her together from bits n' junk...

As I already mentioned, the idea for this piece occured to me last Halloween season, a great time for scoring great campy Warhammer terrain materials from pound shops (or insert local currency here-stores) and supermarkets. I spotted a stack o' skulls for £5 in Tesco, and I immediately had a vision of what I wanted to construct from it. Here is the original decoration:

It stands about 30" tall and is made of that old school polystyrene comprised of compacted balls, the whole thing has then been crudely spray painted, presumably by some underpaid and unmotivated Chinese robot. My basic idea, much as with the Warscryer Citadel I also recently scratch built, was to have a vertical terrain piece with spiralling walkways allowing models to move all the way from ground level to the top. For bigger games this makes for a nice large centerpiece which also acts as a good LOS blocker, and for skirmish level actions there is lots of space for individual figures to swash and buckle, as both heroes and villains are wont to do.

The first thing to do was to adhere the stack to a base of foam, which was itself based on an mdf table mat cut to shape. I then began to build up a bit of additional rocky bulk around the skulls, which I did using yellow extruded foam. As always, I acquired mine by raiding skips (That's refuse bins outside construction works for those outside the UK), though you can buy it in large sheets from large hardware and DIY supply stores as insulation foam. Oh, and remember kids - always wear a mask when cutting and sculpting this stuff, it will kill you otherwise, for realsies.

The best and cheapest option I have found for gluing foam is one of the many knock off version of the "No More Nails" type, which I think is acrylic based (though I may be wrong and I'm too lazy to Google it, even though I am literally working in a browser right now). I think "Gorilla Glue" would also be an excellent choice, but its too expensive for my limited budget.

You will notice from the pic above that as I blocked in the basic shapes, I also added a couple of doors from Mantic Games' Terrain Crate range, although mine actually came from pillaging my copy of Dungeon Saga (something I keep doing and will likely regret when I eventually get round to playing it again). The final things at this stage were to slap a bit of filler into some of the more glaring gaps, and to begin to scrape away at the central skulls to remove some of the regularity in their shape to hopefully create the effect that they have been hewn from the surrounding rock.

Now the basic structure was in place and firmly dried I could finish off sculpting the foam into a more natural and weathered looking form, the block to the left of the skull stack was intended to have been excavated out and worked into useable structure. Next i began to add all the timber framing using a mixture of plastic kit bits and thin modelling balsa wood sliced up with a craft knife. The plastic scaffolding on the side and the palisade wall at the top are all pieces of the 90s siege tower kit from GW, and the fencing is the ever useful palisade fencing from Renedra.

The magical standing stones up on the temple floor were carved from more recycled material, this time denser blue foam. The stone blocks are made from this same material, though i buy them cheaply pre-cut from Firedragon Games, these guys stock loads of useful bits for crafting, including as well the torches used on this piece. Most of the other detail bits came from GW kits via my bitzbox, with the exception of the altar and braziers - they can be purchased in resin from Infinity-Engine. 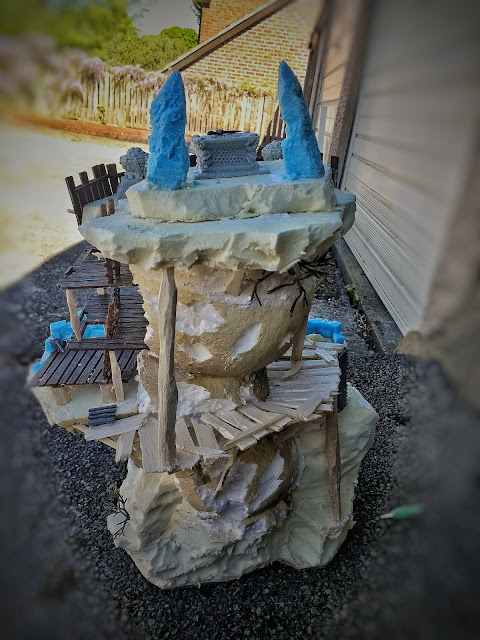 With everything now in place it was time to start painting. Its worth noting that just as with superglue, most aerosol spray paints will melt your carefully carved foam - if you are unsure then try testing on a scrap piece first! You can actually use this chemical reaction in your favour, if you are careful. I experimented here with melting the surface of the cheapo poly skulls to remove that ball effect, too bad that I got lazy and didn't do it all the way round because it turned out pretty well. Next time.


As you can see the bulk of the painting was drybrushes grey! No complicated techniques involved here, I just built up from dark to off white using around 4 or 5 increasingly light passes. My current preference is to take all stone to this level of bright highlighting, then use washes and inks to change the hue afterwards. This takes the garish edge off the edging, though it can look a little excessive at the stage above.


the pic above shows how it looked with the stonework pretty much done, i gave the whole thing a coat of homemade dark purplish wash to create a dark and menacing but slightly magical sort of atmosphere to the piece. After the washes have dried I go back over the whole thing once more using a very soft brush and light grey to just pick out all the most prominent raised areas and bring them back out through the underlying wash colour. then its a case of mixing up a few greens and browns and just adding some discolouration where ever feels natural and logical. This really makes the terrain look alive and "real".


The final touch was to add a variety of undergrowth, moss, vegetation etc. to fit the terrain into my Ghyran (verdant Realm of Life in the Age of Sigmar universe) setting. For this I used my usual mixture of railway and scale modelling materials; static grass, several hues of fine flock, clumping flock, ballast gravel, etc. All available from any model shop or through ebay and applied with a mixture of superglue and PVA.


So, there we have it, one completed dark temple of unpleasantness ready for action in the campaign. I hope to get it into a battle report soon but I got a bit ahead of myself and I don't actually have the factions based in the area complete yet, so it'll be a month or more yet. If you have any questions, constructive criticisms or other comments do please leave them below, I love to chat with other terrain crafters. If you have made anything you think I'd like or may find inspirational why not pop a link below so I can snoop and enjoy your work too! :-)

On more request; if you like what I do here then please consider taking a few minutes to share the blog on social media or withs friends you think may be interested, that would be super appreciated! :-)

Hi, I'd love to hear your thoughts, pop a comment below :-)

Greetings, Welcome to the first in a series of posts which will cover the lore for my ongoing homebrew campaign, The Dark Persists . ... 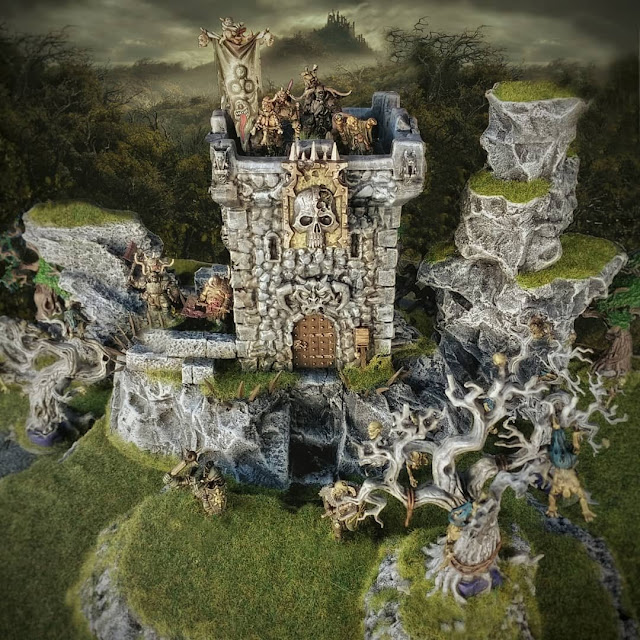